Explore the History of the Duparc-Locoul Family

Guillaume Duparc's sugar farming complex was originally called l'habitation Duparc, then, years later, renamed the Laura Plantation.  At its largest size, it was approximately 12,000 acres, which included properties amassed over time.  In 1804, Duparc, a French naval veteran of the American Revolution, acquired the property.

Duparc also acquired adjacent parcels from Acadians who had settled the land 20 years prior.  Duparc's new farm was located on prime real estate, on unusually high and cleared ground.  He placed his manor house squarely in the middle of the large Colapissa Indian village that had been on-site for over a century. 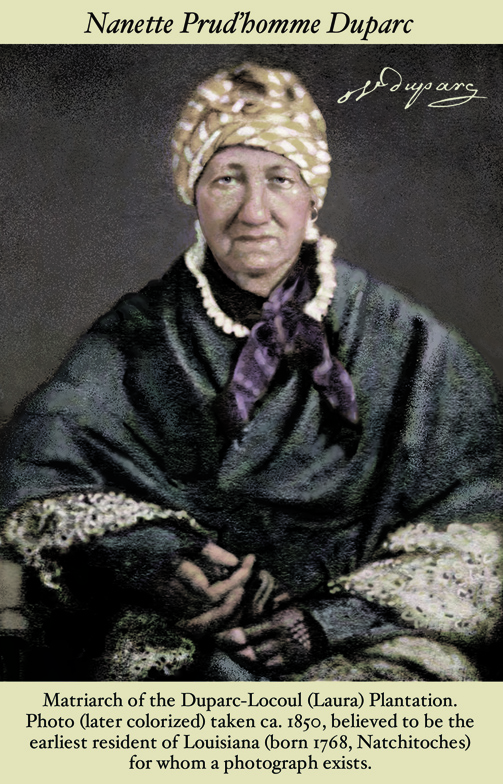 Following Duparc's death in 1808, his wife Nanette Prud'homme took over the daily operations of the farm, becoming the first of four generations of women to run the plantation. In 1829, Nanette "retired," having ceded control of the plantation to her three children (sons Louis and Flagy, and daughter Elisabeth) via formal incorporation of a family business called "Duparc Frères et Locoul." The business would operate under this name until the Civil War.

Laura's grandmother Elisabeth Duparc Locoul, having outlived her French-born husband Raymond Locoul, as well as her two elder brothers Louis and Flagy Duparc, would reign over the business for nearly 47 years. Elisabeth navigated the plantation through the Civil War and the ensuing Reconstruction Period, but divided the property between her own two children, son Emile (Laura's father) and daughter Aimée Locoul de Lobel-Mahy in the 1870s. Aimée's children returned to France in the late 19th century, where her descendants still live to this day.

It was then that Laura's own father Emile would ultimately rebaptize the plantation after his daughter. When Laura decided to leave Louisiana and sell the farm in 1892, it was stipulated in the sale that that the business continue to be called, "Laura Plantation."

After her marriage to Charles Gore in 1891, Laura spent the remaining years of her life in her husband's hometown of St. Louis, Missouri. There, she reared one son and two daughters.

Laura's only grandchild died in the early 2000s, having never had children himself. This sole grandson was the last surviving member of Laura's family. Though the the Duparc-Locoul name is now extinct, there remain two branches of direct descendants:

One line lives in France. The other lives in the United States, the descendants of Laura's great-uncle Flagy and the enslaved teenaged girl, Henriette Jean-Pierre.

The extraordinary story of this branch family of is detailed in the exhibit, "From the Big House to the Quarters: Slavery on Laura Plantation."